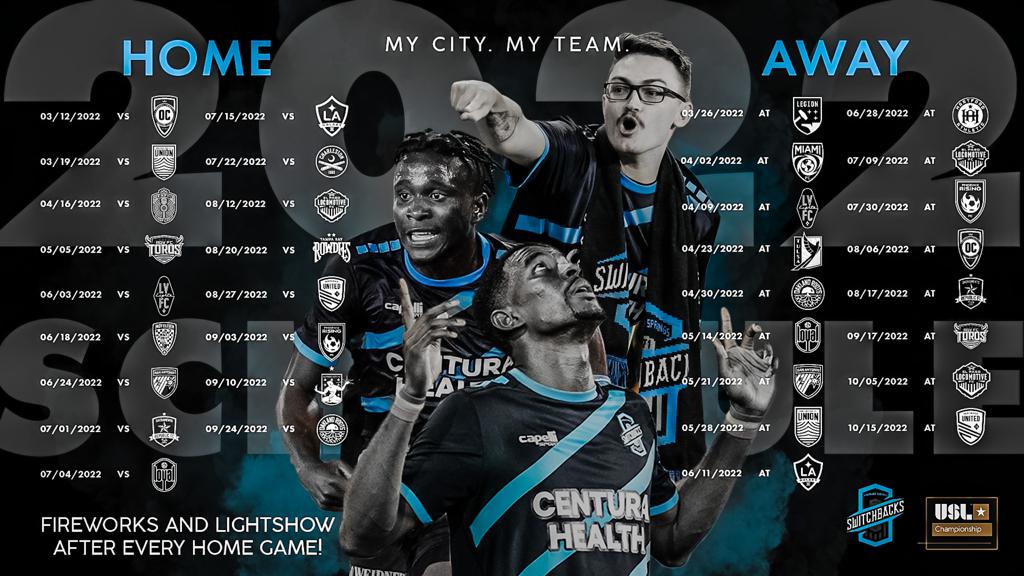 “We’re excited to be able to get into rhythm early and not have to travel those first couple weeks and that sets us up for potentially a good start,” said Switchbacks Head Coach and General Manager Brendan Burke.  “And we’ll have some exciting news in the next few weeks that I can’t share yet about a good friendly at home!  If you’re going to see OC, you want to see them right away and get a measuring stick for where we are early in the season and in our build-up.  And we owe OC one, honestly, because we battered them at their place for the first 30 minutes, and then we just went missing.  We couldn’t make them pay for us really out-planning and out-playing them for the first 30 minutes of that game.”

The Switchbacks begin their away schedule on March 26th with a first-ever trip to Alabama for a matchup against Birmingham Legion FC at Protective Stadium in The Magic City.  South Beach beckons a week later, with the Switchbacks facing Miami FC at Riccardo Silva Stadium on the campus of Florida International University.

“We’re not looking forward to either one,” said Burke.  “Birmingham is not a fun place to go because they have a big budget, they’re a really good team with experience all over the field, they’re well coached, and it’s a very good organization.  That’s a really tough away trip to be asked to go there.  In Miami, [Head Coach] Anthony [Pulis] is a guy that’s been around the league and in MLS, he has some experience back in England, and I think he’s going to turn that franchise around – and quickly.  Those are two extremely tough games to draw, especially early on.”

Twelve of the Switchbacks’ opponents in 2022 made the USL Championship Playoffs last season, led by defending champions Orange County SC.  In total, the Switchbacks will take on 21 different clubs during the regular season – eight of them for the first time in club history (Monterey Bay FC, Detroit City FC, Birmingham Legion FC, The Miami FC, Indy Eleven, Charleston Battery, Oakland Roots SC, and the Tampa Bay Rowdies).  In addition to the aforementioned match against newcomers Monterey Bay FC on March 19th, the Switchbacks will welcome fellow USL-debutants Detroit FC to Weidner Field on September 10th.

Three Eastern Conference clubs will travel to Colorado Springs for the first time during the 2022 season.  On June 18th, the Switchbacks will host Indy Eleven at Weidner Field.  Charleston Battery come to Southern Colorado on July 22nd, while 2021 USL Championship runners-up Tampa Bay Rowdies face off against the Switchbacks on August 20th in Colorado Springs.

“It’s always good to see new faces and new franchises,” said Burke.  “I know last year it became a little monotonous playing the same teams four times, and I’m glad we don’t have to do that.  I don’t know how in the world we’re going to play El Paso three times – the league must have it out for us.  That one is just nuts to me that we’re going to see El Paso three times after playing them four times last year.  But those are the breaks and you have to take what they put in front of you and that’s the job; you have to find ways to win no matter what.  I’d rather play all the top teams throughout the season.  I can’t imagine we don’t have the number one, two or three strength of schedule in the entire league.  I would be dumfounded if we don’t.  But we have to take the punches as they come and roll with them –  and this year will tell us exactly where we are because they couldn’t have made it any more difficult for us.”

The Switchbacks will have to wait until the first week of October for their bye-week, in between a first-ever visit to Colorado for Oakland Roots SC and a road trip to Far West Texas to play El Paso Locomotive FC.

“Having that [bye-week] so late is not helpful – we’d rather that come in the middle of the summer when hopefully you’re still in the midst of an Open Cup run and potentially a big friendly and things like that,” said Burke.  “I guess with it being at the end of the season you could put the spin that it allows you to rest and recuperate going into the playoffs, but you have to be in a playoff position at that point –  so it’s not ideally positioned, but we will try to capitalize on the positioning of it, obviously.  We’re just excited for the season.  We drew an extremely difficult schedule this year, and I think we’ve brought in players that can handle it and players that relish it, and it’s on us now to find out exactly where we are in the pecking order of the big dogs.”