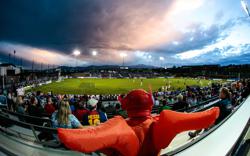 Colorado Springs, Co. (September 14) – On September 3rd the Switchbacks FC played a season defining match against the LA Galaxy 2.  The home team won 3-0 against the opposing team and also had a record turnout from the Colorado Springs Community. Superhero Night held the all time most eventful evening for Switchbacks fans and patrons.

With the help of Jon Eddy Productions, the Switchbacks FC broke the previous attendance record with  4,112 excited fan. Superhero Night not only had an independence day sized fireworks show, but it also accomplished the unthinkable…it brought sports fans and comic book fans to the same venue in one harmonious union. There is no better way wrap up the ending of the 2nd regular season with thousands of smiling faces. Superhero night had such a big impact that it would be a safe bet to say something similar will be happening in the 2017 season.

The Switchbacks would like to thank the Colorado Springs community for coming together for an amazing night. Now we can all look forward to the season closer against Seattle Sounders 2 on Saturday September 17th.

Tag(s): In the Springs