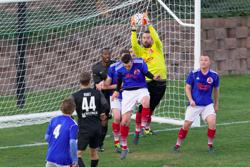 Gibbens is a 6’0”, 185 lbs. keeper originally from Stillwater, Oklahoma who has been starting for the Boulder Harpos FC the last few seasons. He has played for a variety of different clubs throughout his career including the 1790 Cincinnati (PASL-Pro), Colorado Lightning (PASL-Pro), and Fort Wayne Fever (PDL). A University of Dayton Alum, Zac has been involved in both coaching and professional play in various areas across the country since he graduated college in 2007.

Zac was put to the test earlier in the 2016 season when the Harpos were matched up against the Colorado Springs Switchbacks FC in the 2nd round of the Lamar Hunt US Open Cup Championship. Although the Switchbacks came out with the victory, it was a hard fought battle. Zac had a solid performance with 4 saves while allowing only 1 goal.