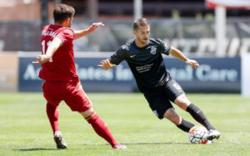 By: Joel Huber
Colorado Springs, CO (June 26, 2016) – The Colorado Springs Switchbacks fell 0-1 to the Real Monarchs SLC after playing down a man and a late penalty miss by Captain Luke Vercollone.

“We had plenty of chances to put the game away,” said Marty Maybin. “But, when you don’t take your chances the other team builds their confidence.”

“I thought we did enough to win the game or even get a point out of it,” said Head Coach Steve Trittschuh. “We’re looking for the guys to be ruthless in front of goal and finish those chances. Unfortunately we’re just not clicking right now, but we’ll regroup and get ready for Wednesday.”