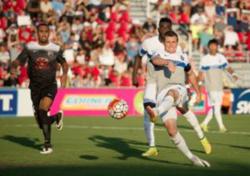 The Switchbacks would have a few chances in the opening minutes of the match, but weren’t quite able to finish their shots. Unfortunately a critical defensive error by JJ Greer in the 8th minute would lead to San Antonio taking an early 1-0 lead in the 8th minute as Alvarez was able to loft the ball to Reed who slotted it past Devala Gorrick. Things wouldn’t get much better for the Switchbacks as attempts by Marty Maybin and Luke Vercollone went unfinished. San Antonio earned a free kick just outside the box in the 35th minute and Stephen McCarthy was able to finish the shot and give San Antonio the 2-0 lead which they would take into halftime.

Head Coach Steve Trittschuh made two changes at halftime as he brought on Davy Armstrong for Jordan Burt and Saeed Robinson for Marty Maybin in hopes of bringing fresh energy to start the second half. The Switchbacks would apply pressure early on in the second half and were able to draw a penalty in the 50th minute. It would be the Captain, Luke Vercollone, who would convert from the spot to cut the deficit in half.

“You have to give San Antonio credit,” said Captain Luke Vercollone. “They were a tough team to play in a difficult environment. We’ll get back to work on Monday and keep training hard and get ready to beat the Real Monarchs on Sunday.”

The Switchbacks would continue applying pressure as the second half went on, but a stingy San Antonio backline would keep the Switchbacks from scoring again.

“We came out pretty sluggish in the first half,” said Head Coach Steve Trittschuh. “We came out a little better in the second half and created some chances, but it just wasn’t good enough. We”ll regroup and get ready for the next two matches against Salt Lake which are really important.”