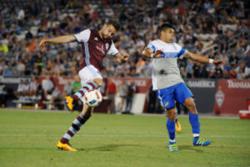 Both teams had their fair share of opportunities in the first half. While the Colorado Rapids were able to control the majority of possession, it was the Switchbacks who had the higher quality possession. The Switchbacks best opportunity came in the 40th minutes as Luke Vercollone fired off a shot from about 12 yards out but it was straight at the keeper. The Switchbacks would hold on to keep the match scoreless heading into halftime.

Coming out of the break, it was the Rapids that would gain the upper hand. The Rapids had numerous opportunities early in the second half, but weren’t able to capitalize as their shots went wide or high of the goal. Finally, in the 84th minute Dillon Serna was able to break the scoreless deadlock firing a shot from outside the box to Billy Thompson’s right following a corner. The Switchbacks were nearly able to draw level in stoppage time as Jordan Burt was able to apply pressure, but the Rapids were eventually able to recover. The Rapids would hold on to take the match 1-0 to advance to the Round of 16 in the Lamar Hunt U.S. Open Cup.

This was the second time that the Switchbacks played the Rapids in the Lamar Hunt U.S. Open Cup. Last year the Switchbacks fell 4-1. It is unknown what round the Switchbacks will enter the tournament next year as the USL attempts to become a tier two league in the U.S. Soccer pyramid.

“I thought the guys put on a good show tonight,” said Head Coach Steve Trittschuh. “Having a quick turn around from our match on Saturday in LA we had some tired legs. We had to play back a little more, but I thought we were pretty effective doing that. We created some good chances but so did they. I can’t fault their effort and we’ve just got to keep rolling into Saturday.”

The Switchbacks will now head to San Antonio for a USL match with San Antonio on Saturday, June 18th at 6:30 MDT.