Switchbacks Stay Atop the Western Conference With Scoreless Draw vs LA 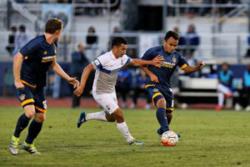 By: Joel Huber
Carson, CA (June 11, 2016) – The Colorado Springs Swtichbacks FC played to a scoreless draw on the road vs Los Angeles Galaxy II to stay atop the USL Western Conference.

The first half saw numerous opportunities but neither team able to capitalize on them. The Switchbacks were able to control the opening minutes of the match, including a few goal scoring opportunities. Captain Luke Vercollone was able to find Marty Maybin in the box, but he couldn’t quite put the shot on frame. LA was able to get back in the game with a few opportunities of their own but goalkeeper Devala Gorrick and his backline stood firm and were able to take a scoreless tie into halftime.

“It wasn’t our best game,” said Head Coach Steve Trittschuh. “But, we came away with a point in LA. We’ve lost every match in LA previously; so to come out and get a point against a good team like that, we’ll take it.”

The Switchbacks would have a few scares early on in the second half as Jack McBean, and Ethan Zubak were able to fire shots off within minutes of each other but both went over the bar. LA would continue to apply pressure in the Switchbacks attacking third, but Devala Gorrick and his backline stood firm keeping the match scoreless. The Switchbacks would earn a few opportunities late into the second half but weren’t quite able to put away their chances. LA Galaxy were nearly able to come away with a goal late, but Devala Gorrick was able to come up with a huge save to maintain his clean sheet.

“It’s a bit of mixed emotions,” said goalkeeper Gorrick. “It was great to get another clean sheet tonight, but I thought we could’ve come away with three points. We just have to re-group and move on to the next match.”

Tonight’s result increased the Switchbacks unbeaten streak to 6 matches in league play as well as the team’s 5th game without conceding a goal. The Switchbacks remain in first place with 23 points and a game in-hand of 2nd place Vancouver Whitecaps (22 points).

The Switchbacks will now head back to Colorado for 4th round Lamar Hunt US Open Cup Action vs the Colorado Rapids on Tuesday June 14th at 7:00 MDT.