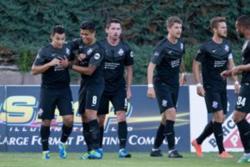 The Switchbacks picked up where they left off Wednesday night by applying pressure on Saint Louis early on in the match. It would take just over two minutes for Marty Maybin’s pressure to force a mistake by Saint Louis which left another wide open goal for him to put the Switchbacks up 1-0 in the 3rd minute. The Switchbacks would continue to dominate possession and control the rhythm of the match. Josh Suggs would break down the left side and find Miguel Gonzalez who was able to finish in the bottom far post to give the Switchbacks a 2-0 lead at halftime.

“I feel great, it was a tough opposition, they have a lot of hype,” said Marty Maybin. “It was a statement to the league, and a dominant performance at home that we have to continue to build on.”

Saint Louis came out in the second half wanting to get back into the game. Saint Louis was able to apply pressure early on and continue that pressure for the duration of the second half. Fortunately, the Switchbacks backline stood firm breaking down everything that Saint Louis threw at them. Devala Gorrick was also able to put in another fantastic performance in goal to continue mastering his domain and earning another shutout victory. The Switchbacks have now completed 4 clean sheet wins at Switchbacks Stadium from their 5 home matches in league play.

“It’s a good win, and a good team we played against,” said Head Coach Steve Trittschuh. “I’m really happy with how we started the game, I wish we would have been able to keep the momentum going and score more goals. Defensively I thought we were fantastic tonight, we’ve got to keep it going and take that into LA next week.”

The Switchbacks will now head back to Los Angeles for a re-match with LA Galaxy II on Saturday June 11th at 8:30 MDT. The match will be shown live on the Switchbacks FC website and the USL YouTube Page.