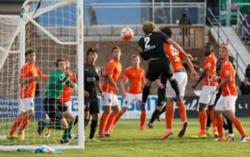 The Switchbacks picked back up where they left off a few weeks ago by taking it to the Blues early on in the first half. The Switchbacks were able to create numerous opportunities early on before earning a Josh Suggs corner kick in the 32nd minute. With the wind blowing toward the south end, Suggs was able to play a perfect ball to Josh Phillips who was able to head it home for his first goal of the season. Unfortunately Phillips was injured following the play and JJ Greer came in as a substitute.

The official initially added on 5 minutes of extra time to the end of the second. Both teams continued to apply pressure with both teams getting into the box but weren’t able to finish their shots. About halfway through the original stoppage time, the Blues had won a free kick just outside the 18 yard box after a tackle by Davy Armstrong. The official then issued a red card to Miguel Gonzalez before rescinding it. The biggest controversy came in the 7th minute of stoppage time as Christian Ibeagha was called for a hand ball in the box.  Roy Meeus was able to convert from 12 yards out to give the Blues the equalizer and the first goal allowed at Switchbacks Stadium in 2016. At the final whistle, over 8 minutes of stoppage time had been played.

“The quality of both teams were at a very good level,” said Head Coach Steve Trittschuh, “but, circumstances out of both teams control determined the outcome of the game. We push forward and I look forward to our next match”

“It was a tough result for us,” said Man of the Match Josh Suggs. “We should’ve had three points tonight, but there’s nothing we can do about it. We just have to move on to the next match.”

The Switchbacks will travel to Arizona on Wednesday to take on Arizona United SC in the third round of the Lamar Hunt U.S. Open Cup at Peoria Sports Complex on June 1st at 7:00 MDT. The winner of the match will face the Colorado Rapids at Dick’s Sporting Goods Park in Denver on June 15th in the fourth round.