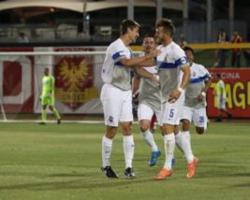 It was the Switchbacks who provided the pressure early on in the match, controlling possession and getting shots off in the attacking third. The Switchbacks finally broke through in the 8th minute as Josh Suggs was able to use the wind to his advantage and curl the ball in for the rare goal directly from a corner kick. That goal marked the first for Suggs of the 2016 campaign.

“I’m pretty happy about the goal.” Said Suggs. “It’s a play we’ve been working on in practice, I tried to play it in close to the goal for someone to tap it in, and the wind happened to catch it.”

The teams continued to battle in the first half before Arizona United was able to finally breakthrough in the 20thminute as they were able to find the equalizer following a corner kick and a shot from inside the box. Following the goal the Switchbacks kicked the pressure back up again and were able to capitalize in the 33rd minute. Miguel Gonzalez broke down the left side and was able to curl in a beautiful ball into the upper corner of the far right to regain the lead for the Switchbacks. The Switchbacks would then take the 2-1 lead into halftime after goal keeper Devala Gorrick was able to come up with a huge save in the 42nd minute to keep the lead for the Switchbacks.

“Getting the win as a team was the most important part.” Said Gonzalez. “It felt good to get a goal again. We’ve got another match coming up, and we’ll take what we did tonight into that match.”

The second half got off to a much slower start with neither team able to create opportunities in the early going. Attempting to provide fresh energy, Head Coach Steve Trittschuh used his first substitution on Saeed Robinson who came on for Marty Maybin who was carrying a yellow card. Saeed Robinson was able to break down Arizona United’s backline after following his original shot and was able to slot it into the back of the net to give the Switchbacks a 3-1 lead in the 77th minute. Unfortunately Robinson’s time would be cut short after being issued a red card in the 85th minute for apparent “intent” following a harsh tackle against Robinson. It is likely the Switchbacks will appeal the red card to the league. The man advantage wouldn’t be enough for Arizona however, as the Switchbacks would take the 3-1 victory from Peoria.

“I’m really happy with the win, I’m not happy about the red card though.” Said Head Coach Steve Trittschuh. “That’s not indicative of this club or how we play. Mentally we were really good, we created a lot of chances, and I feel like this team is really exciting right now.”

Tonight’s match completed the season series between the Western Conference rivals. The teams will meet on June 1st at Peoria Sports Complex for the right to face the Colorado Rapids in Denver on June 15th in the 4th round of the Lamar Hunt U.S. Open Cup.