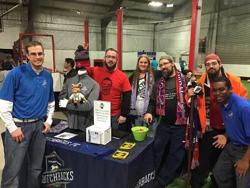 The facility roared with energetic Pride Soccer Club players and families as the club kicked off its youth futsal league. Ziggy was kept busy engaging local soccer fans as the Switchbacks “Street Team” made its debut offering fans the opportunity to sign up to win an opening day prize pack! Congratulations go out to fan, Chris Delgado, for winning a four pack of tickets to opening day! The Switchbacks sales team introduced 2016 season and partial packticket plans which created excitement for our upcoming season.

The evening hours brought the Soco Classico game where the Rocky Mountain Bighorns and Colorado Springs Blizzard battled in their yearly rival game with the Blizzard defeating the Bighorns 11-9 in a packed out facility cheering on both teams. Ziggy became an honorary member of the Bighorns team by getting in on their team picture!

Switchbacks FC season and partial game pack tickets are on sale now. The 2016 schedule is expected to be released by the end of this month. For more information on tickets, please contact us at 719-368-8480 x1 or purchase online at www.switchbacksfc.com.

Tag(s): In the Springs