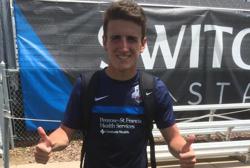 Colorado Springs, CO – The Colorado Springs officially announced today the signing of Real Colorado Developmental Academy midfielder and Pine Creek High School grad Nick Cullen on an amateur contract before heading to Notre Dame where he will go on to play Division I college soccer.

“We are very excited for Nick that he has been practicing and playing with the Switchbacks,” said Notre Dame Head Coach Bobby Clark. “This is a great opportunity for him to get a feeling for the next level of soccer and will certainly help prepare him for top college level soccer in the ACC.”

Cullen began his club career with Washington Premier FC in Tacoma, Washington in 2008 before coming to Colorado Springs. Cullen has spent the majority of his playing career playing for local Colorado clubs. During his time with Colorado Rush, he was named the Colorado Rush Boys Player of the Year in 2012 and helped lead Rush to back-to-back championships in the Phoenix SC del Sol President’s Day tournaments in 2011 and 2012.

Cullen only played one season of high school soccer, where he was a member of Pine Creek high School’s JV team that finished undefeated his freshman year. He then made the decision to commit to Real Colorado where he has been with the club since 2012 before signing with the Switchbacks.

“I am excited to spend my last few weeks with the Switchbacks before heading out to Notre Dame,” said Cullen. “It is a great opportunity for me to play at a very high level before I begin my college career.”

This is the first academy signing for the Colorado Springs Switchbacks FC. The Switchbacks and Real Colorado have been working together the past two seasons and have made a point to pursue and develop local talent from Colorado. The Switchbacks have a handful of players from Real Colorado participate in training and a few have been on trials, but this marks the first academy player signing. Cullen has signed an amateur contract so that it will not affect his eligibility to play at Notre Dame for the Fighting Irish this coming fall.

“We are really happy that we were able to sign Nick to the Switchbacks,” said Head Coach Steve Trittschuh. “Our relationship with Real Colorado’s Developmental Academy has really helped in many ways. We are in constant contact with the coaches there and frequently have their top players training with us. They have a very good program and the Switchbacks will benefit from our partnership.”