The past seven days have definitely seen things continue to move in the right direction for Colorado Springs Switchbacks FC, with the announcement of the club’s first international exhibition against top Bundesliga side Mainz 05 capping off a week that saw the side move into the Fourth Round of the Lamar Hunt U.S. Open Cup, and to the top of the USL’s Western Conference standings.

For Coach Steve Trittschuh, the progress the Switchbacks have continued to make on and off the field has been exciting to be part of, as the club continues to create even greater visibility for itself, and the city of Colorado Springs.

“Everything’s been going well,” Trittschuh said in a brief visit to the USL offices last week. “We’ve been working on this international game for a while, and to bring Mainz over is going to be big, because a lot of people know them. The Bundesliga was on TV this year, and they finished sixth in the league standings, so it’s going to be a good game.”

While the club has continued to perform well on the field this season, the Switchbacks are also making even greater inroads into the local community. The club announced a new partnership with Coldwell Banker last week, the most recent in a string of local sponsorship deals. In addition, the club has seen growth in its attendance from a season ago, with its USL Game of the Week clash against the Portland Timbers 2 attracting a club-record attendance to Switchbacks Stadium.

“The community has taken to us really well,” Trittschuh said. “The new mayor [John Suthers] is really high on us, and the business community is coming around. We’ve just got to keep filling that stadium game after game, and that will help us on the field.”

With the manner in which Trittschuh’s side plays at Switchbacks Stadium, the fans can enter most contests confident of a positive result. Since the start of the club’s inaugural season, the Switchbacks are 14-3-3 in the USL regular season and playoffs, among the best home records in the league.

Starting on Saturday, though, the side will hit the road for three key games in both the league and the Open Cup, with visits to the LA Galaxy II, Colorado Rapids and San Antonio FC on the slate. After falling to the Rapids a season ago at the same stage, Trittschuh wants his side to put in a good showing against the MLS side he played almost 100 games for, but is also mindful of the need to continue to get good league results as well.

“We’ve got to look at it and see what is important, but we want to have a good showing,” Trittschuh said. “The guys, they’re playing with confidence right now, and hopefully we can go in there and show well again.” 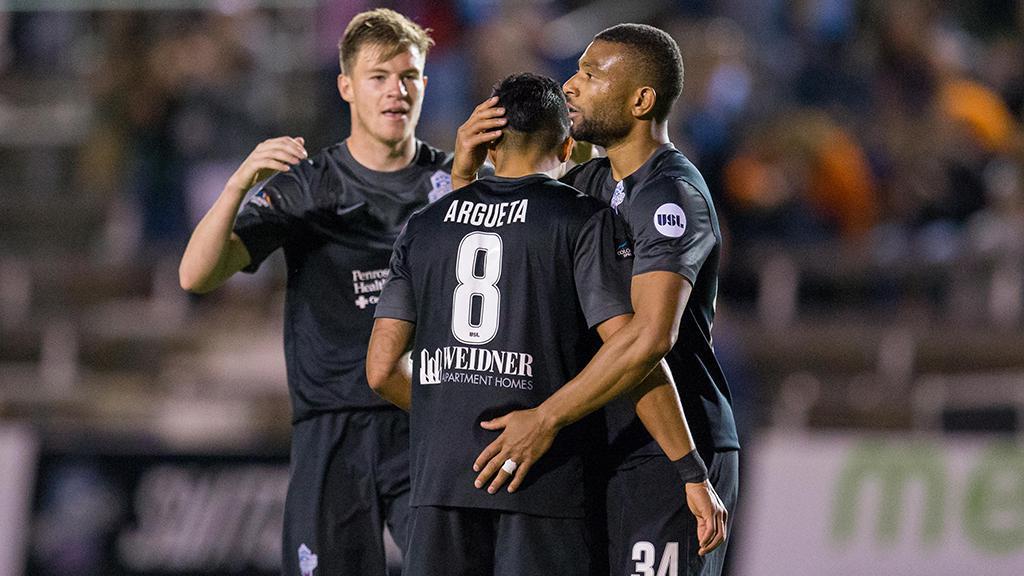 With the way the side is playing right now, it seems certain that come the end of the season they’ll be among the leading contenders to take home the championship. With the added depth that was on display in last week’s Open Cup victory in Arizona, though, Trittschuh thinks the side is well positioned to find success when the 2016 USL Playoffs come around.

“I feel we have a chance,” Trittschuh said. “Everything’s new when the playoffs come around. It’s a new season then, so now our main objective is to be one of those top four spots to get home-field advantage in that first round, and then go from there.

“I think these guys have a good mindset this year, and they’re focused on what they have to do. It’d be great to bring a championship there, because I think things are growing for us. We’ve just got to keep doing what we’ve been doing.”