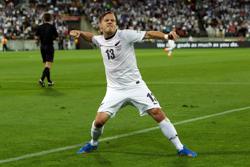 James comes to the Switchbacks by way of free agency. James most recently spent time with FC Haka of Finland’s second division, Ykkönen. He made 23 appearances and tallied four goals during the 2016 campaign. James is an active member of the New Zealand National Football team where he has 21 caps and three goals including two in World Cup qualifiers. James’ performance in 2006 earned him the New Zealand Soccer International Young Men’s Player of the Year in 2006. With the New Zealand National Under-20 Team he made 8 appearances and tallied 7 goals.

“Chris is an experienced player that will solidify the center of our midfield,” said Head Coach Steve Trittschuh of James. “He is the vocal and team leader that we need in that position. He has 21 international appearances for New Zealand and most recently been playing in Finland. We expect a lot out of Chris this season and he is willing to be a huge part of us competing for a championship.”

“I am delighted to have joined this great organization for the upcoming USL season,” said James on joining the Switchbacks. “After speaking with coach Steve Trittschuh, I had no hesitation signing with Colorado Springs Switchbacks FC and I look forward to working with my new management, and teammates to achieve success.”

James joins Shane Malcolm as one of the new Switchbacks signings that have joined the club this year.