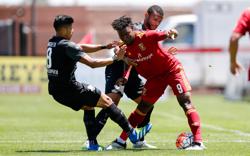 Frater joins the Switchbacks from Red Stripe Premier League side Harbour View based in Kingston, Jamaica. Frater became the team’s leading goal scorer in his third year with the club, tallying seven goals including a hat-trick. He then went on loan to the Real Monarchs where spent the 2016 season. He made 19 appearances for the Monarchs including an appearance in a 1-0 victory over the Switchbacks at Switchbacks Stadium and the 0-0 draw at Rio Tinto in Salt Lake City. He finished the season with one goal for the Monarchs in a 3-2 comeback victory over Sacramento Republic FC.

“Fans will know Kevaughn from playing with the Monarchs last season,” said Head Coach Steve Trittschuh of Frater. “When he became available we looked into bringing him here this season. Wolde Harris got a chance to go and watch him train in Jamaica this last off season and reported he really looked sharp. We expect him to come in and be a goal scorer for us this season..”

Kevaughn has also spent time with the Jamaican U-23 and senior national team squads. With the senior squad he made appearances in the team’s World Cup qualifiers versus Panama and Haiti.

“I’m very excited to be joining Switchbacks FC,” said Frater on joining the Switchbacks. “It’s a wonderful opportunity for me to showcase my talent, continue to work hard, be professional, and have fun with the fans. I’m very excited for new beginnings.”

Frater joins Eddy Prugh as the newest additions announced by the Switchbacks this week.