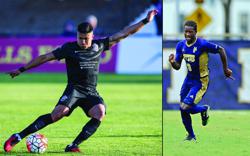 Argueta was one of the most crucial members of the Switchbacks 2016 squad. Trailing only Josh Suggs, Argueta played in 29 matches totaling 2,551 minutes. Primarily playing as a defensive midfielder, Argueta helped control the midfield for one of the best defenses in the league. Argueta was also able to add two assists and a long distance goal during the 2016 campaign where he received the Back Chat Supporters 2016 Young Player of the Season award.

"We are very happy that Rony is coming back to the team for the 2017 season," said Head Coach Steve Trittschuh of Argueta's return. "He was our most consistent player last season and a huge part of our success on the field. I know he is ready to have another huge season in 2017."

Prior to joining the Switchbacks during their inaugural 2015 season, Argueta played for USL PDL club Ventura County Fusion just prior to their playoff run in 2014. He helped the team by scoring the equalizer in the semifinal match against Kitsap Pumas. While with VC Fusion, Argueta was subbed into the match against Rangers FC (Scottish Premier League) and scored within three minutes. Argueta graduated from the University of California, Santa Barbara in 2013, where he was named MVP of his team for the 2011-2012 year. Since the Switchbacks inaugural 2015 season, Argueta has played a total of 4,147 minutes in 53 games and has tallied three goals and two assists.

"I'm extremely blessed, fortunate, and happy to be returning to a great organization and city," said Argueta on re-signing with the Switchbacks. "A big thank you to Switchbacks FC for another opportunity not only to grow as a footballer, but as an individual as well. Can't wait to get started!"

Born in Kingston, Jamaica, McFarlane came to the United States when he was 11 before beginning his soccer career. He spent his first two years in college attending Saint Leo University before transferring to Florida International University. He joined the Panthers as a junior playing 31 career matches totaling 1,983 minutes. He tallied four goals and added an assist during his tenure as a defender.

"Sean is a player that we had train with us two summers ago after he was with Jamaica at the Gold Cup," said Head Coach Steve Trittschuh of McFarlane. "He is a very strong defender that has a lot of versatility and he will help solidify our defense but also is as threat in the attack."

McFarlane made his first international appearance for the U-20 Jamaican national team during U-20 World Cup qualifying. He scored in just his second appearance with the squad, he made a total of 15 appearances at the youth level. McFarlane was also a member of of the 2015 Gold Cup runner-up Jamaican squad who fell to Mexico in the Final.

"I'm very happy and excited to sign with the Colorado Springs Switchbacks FC," said McFarlane of signing with the Switchbacks. "With the blessings of the Lord I look forward to a great 2017 season."

The Switchbacks will kickoff their 2017 USL campaign at the Tulsa Roughnecks on March 25th before returning to Switchbacks Stadium for their home opener on April 1st against Oklahoma City Energy FC.