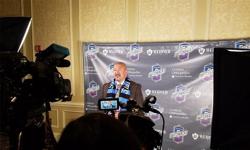 "Dean [Weidner] told me that Colorado Springs has a place in his heart, and once you come here you'll want to come back," said Weidner Apartment Homes Vice President - Public Relations, Greg Cerbana "We've chosen to have our Weidner brand represented here and merged with the Switchbacks, thanks to the dramatic growth of soccer and the Switchbacks being a family organization. We are excited to be apart of this and the community as the Switchbacks work to bring a championship to Colorado Springs."

Weidner Field was originally built in 1985 at what is considered Coleman Park in a joint effort between the United States Soccer Federation (USSF), United States Olympic Committee (USOC) and the City of Colorado Springs. The intent was for the facility to be the host to US International matches and higher level competitive events.

On June 14, 2014 the Colorado Springs City Council approved an agreement with the Switchbacks that gave the new USL franchise a ten-year lease on the site. The Switchbacks FC performed a $3.0M renovation of the stadium that incorporated a 5,000 seat venue, press box, enhanced sports lighting, suite seating, broad cement concourses, restrooms, locker rooms, administrative offices, concessions and public Wi-Fi. The Switchbacks continue improvements for 2016 by adding an LED display and concourse improvements that include shade awnings.

The Switchbacks will kickoff their 2017 USL campaign at the Tulsa Roughnecks on March 25th before returning to Weidner Field for their home opener on April 1st against Oklahoma City Energy FC.

Founded in 1977, Weidner Apartment Homes is a privately held real estate company that owes its success to their most important resource - their people. As of January 2017, there are 244 multi-family residential communities in the Weidner portfolio, representing approximately 46,400 units located in ten U.S. states and four provinces of Canada. According to the National Multi-Family Housing Council, Weidner is now the 29th largest private owner of apartments in the United States. In addition, Weidner owns and manages approximately 396,000 square feet of commercial, retail and office space. Headquartered in Kirkland, WA, Weidner’s commitment to delivering value drives their vision to distinguish the company as an industry leader in each of the markets where they operate.