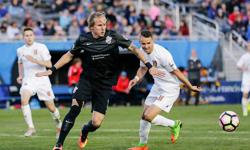 Full of confidence after defeating their Rocky Mountain rivals, the Colorado Springs Switchbacks FC will make their inaugural trip to Nevada this Saturday for a showdown against Reno 1868 FC at Greater Nevada Field.

The USL partner of Major League Soccer’s San Jose Earthquakes, Reno 1868 FC have struggled mightily to begin their first season in the United Soccer League.  Three defeats and a draw have Reno 1868 FC – so named after the year of the city of Reno’s founding – sitting just a solitary point above the bottom of the Western Conference.

In stark to contrast to Reno 1868’s early 2017 fortunes, the Colorado Springs Switchbacks travel to The Biggest Little City in the World buoyed by a vital 2-1 win over the Real Monarchs SLC at Weidner Field.

“That win, it means a lot…no; it means everything,” said Josh Phillips immediately following the victory over the Real Monarchs.  “The win was what we needed and what we’d all been working so hard on.  To have it come in front of our home crowd meant even more, but now we need to take that on the road because we have the taste of victory and we want that again.”

The win against the Real Monarchs SLC at Weidner Field was the Switchbacks’ first three points in Colorado Springs this season, after having previously tied the Oklahoma City Energy FC.

“It wasn’t pretty, but we got it,” said head coach Steve Trittschuh after the match.  “I told the guys that we needed to grind it out and we did.  We could have put the game out of reach if we’d taken more of our chances – we didn’t play our best, but at this point with the injuries and all the travel over the last few days we’ll take the three points.”

“We had to grind for the win, and it feels really good,” echoed midfielder Eddy Prugh, who impressed alongside Rony Argueta in the heart of the Switchbacks’ midfield.  “Now that we’ve got the win we can get back to the normal swing and take some pressure off us mentally – we were really pushing for that win.  Anytime you get three points you want three more!”

It was Prugh’s pass that began the attack that found winger Masta Kacher, whose 15th-minute strike is once again a contender for the USL’s Goal of the Week.  Also starting for the Switchbacks in the victory over the Monarchs was midfielder Luke Vercollone who pushed forward in support of the Switchbacks’ attack at every opportunity.

“I challenged all the players before the game and Eddy [Prugh] really showed up for us,” said Trittschuh.  “We needed his legs in there and he delivered.  Luke [Vercollone] played very well too – I’m very happy with his performance.”

Cameroon international goalkeeper Moise Pouaty was given his first start for the Switchbacks against the Monarchs, and will no doubt be pushing for another opportunity between the sticks after an impressive debut.

“It’s funny because he’s [Pouaty] only been here a couple weeks,” said Trittschuh.  “To see him [against Real Monarchs SLC] and see what he’s capable of…he’s going to be a top quality ‘keeper.  He’s everything that we thought – and we knew with him playing for the Cameroon National Team that he’s very talented.  He’ll help solidify our defense and he gives us something we’ve never had just with his wingspan.”

Despite their difficult start to the 2017 season, Reno 1868 FC have a roster full of USL experience that will be desperate to notch their first win at Greater Nevada Field.

“It’s a huge weight off our chest,” admitted Josh Suggs when asked about the Switchbacks’ first victory at Weidner Field.  “It feels to good to get all three points and we really needed it.  Right now we have to rest and then refocus.  Reno [1868 FC] are a good team, I’ve played with some of their players and I know that’s going to be a tough place for us to go.”

One of the players Suggs mentioned is Jamaican defender Brenton Griffiths.  Teammates with Suggs on the Orange County Blues in 2014 and ‘15, Griffiths is a towering defender who is very dangerous from set pieces with his aerial ability.  Already beloved by 1868 fans for having scored the first goal in team history – a thundering 4th-minute header against the Vancouver Whitecaps FC 2 – Griffiths will most certainly start at the heart of the Reno 1868 defense, perhaps alongside American Jimmy Ockford.  Having given up a combined nine goals in their last two USL matches, Reno 1868 must regroup around experienced players like Griffiths for the visit of the ever-improving Switchbacks.

“It’s now 2 losses in a row for them,” said Trittshuch after the final whistle of Reno 1868 FC’s 4-0 loss to San Antonio FC.  “They’ve got Dane Kelly who we know can score goals in this league and is a player we’ll have to take care of and keep our eyes on.  We need to go there and just play – when we go away from home we have to play the same way.  The week of rest will be huge for us.  It’s clear that our team will score goals and we’ve just got to keep our defensive shape.  As long as we work for each other and stay together defensively, we’ll be alright.”

Canadian striker Mackenzie Pridham has recently been paired with Kelly in Reno 1868’s attack, with both players notching goals against the Real Monarchs SLC in a 5-3 loss on April 6th.  Kelly scored twice inside the final 10 minutes of the match at Rio Tinto Stadium in Sandy, Utah, in what would prove to be the most recent of Reno 1868’s goals.

No matter the growing pains associated with the early days of the Reno 1868 franchise, Saturday’s hosts are a dangerous team who play in front of a fan base that will be giving their all to ensure a first victory against the Switchbacks.

For the Switchbacks, a week of rest and recuperation in the altitude of Colorado Springs is the perfect tonic after a stretch of three matches in just nine days ended with the morale-boosting victory over the Real Monarchs.

“It’s great for us to have the week off now to prepare and to be able to think about just one team,” said Eddy Prugh.  “Reno are a new team so there’s a lot of excitement around them and it will be a good experience and a test for us to go there and see what they’re all about.”