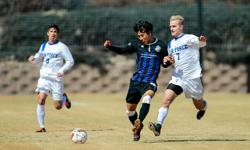 “I think we’ve figured out our strengths and weaknesses as a team and that’s the point of the preseason.”  - Marty Maybin.

On Sunday afternoon at Weidner Field, the Colorado Springs Switchbacks FC finished their preseason match schedule with a comfortable and confident 3-0 win over the United States Air Force Academy.

Goals from Jordan Schweitzer and Toby Uzo bookended a penalty kick from Jordan Burt, as a strong lineup for the Switchbacks looked to fine-tune their match fitness ahead of next weekend’s USL regular season opener against the Los Angeles Galaxy II.  Air Force played well, after a 2017 season that saw Head Coach Doug Hill’s Flacons reach the NCAA Tournament.

“I think at this point we’re just getting the rust out,” said Switchbacks captain Josh Suggs who started at his customary left back spot.  “I think we’re ready. Air Force are a good, fit team so this was good for us. Preseason this year has been better than the last couple years.”

“What Suggsy’s been saying to the team is that in the first few games we’re going to have to grind out results and make sure we win at home,” said Switchbacks Head Coach Steve Trittschuh.  “We gave up just one goal in preseason – that’s not bad! The defensive side of the ball is important. What I’ve been preaching to the guys is to be solid defensively and that our attack will come.  Everyone has to work on the defensive side of the ball. This week we’ll keep getting sharp on how we want to play and attack teams, and we’ll be ready to take it to LA. We’re going to press the hell out of teams this season.  We’re really looking forward to opening with the first few games at home and that will help us.”

“We always want competition at every position,” said Trittschuh.  “I can’t say anything bad about the way the guys have been fighting for places during the preseason.  I’ve got no complaints. We need to settle on our starting XI versus LA. Whoever comes in will add to our game and hopefully give us something different.  If someone is not up to par someone else steps in and that’s how it should be.”

“The Switchbacks have brought in the right pieces this offseason,” said Marty Maybin.  “The hard work is done and now we just need to finesse everything and work out the little details of our game.”

One of the key questions that Switchbacks fans have been asking throughout this preseason revolved around who will start in goal for Steve Trittschuh’s team when the USL begins next Saturday.  Last year’s number one Moise Pouaty got the call against Harpo’s FC on Wednesday evening at Weidner Field, while Steward Ceus was given the nod in Sunday’s victory against the Air Force Academy.  “Both goalkeepers are pushing each other – both have good qualities and they each have some weaknesses,” said Trittschuh. “The situation there is the same as every position: we don’t want to say, ‘you’re a starter,’ because we need guys coming in hungry and ready to play.  In this last week of practice, we need to settle on the starting XI that’s good for LA.”

Preseason for the Switchbacks included a trip to USL Western Conference foes Reno 1868 FC on March 18th, with a Jordan Burt penalty kick giving the Switchbacks a solid away win against a team they’ll face twice in the span of less than a month during the regular season.  A visit to The Biggest Little City in the World on April 14th will start the 2018 rivalry, before the Switchbacks host Reno 1868 FC on Cinco de Mayo at Weidner Field with Colorado Technical University sponsoring a cushion giveaway.

"It’s been a long preseason and the guys did well with the time we had,” said Shane Malcolm.  “Mostly we faced college teams, but we got to play versus Reno [1868 FC] and got a good result there.  In this last week, we’ve got to get the new guys adjusted to the way we play. Hopefully, we make the playoffs this season – that’s the goal of everyone on the team.  Preseason has been good for us and we’re getting better.”

For the first time in franchise history the Switchbacks will host a game on the opening weekend of the USL season.  Saturday’s match against Los Dos will feature a St. Patrick’s Day celebration that includes $1 green beer during the first 30 minutes after gates open, with a firework show to follow the full-time whistle.  March 24th will see a visit from the Portland Timbers 2 and former Switchbacks defender Josh Phillips that will feature a beanie giveaway courtesy of Weidner Apartment Homes, before the Switchbacks begin their 2018 road campaign with a trip to Saint Louis FC on the final day of March.

“We built a lot of excitement over these last few weeks and we’ve seen our potential,” said Jordan Burt immediately following the win over the Air Force Academy.  “We’re definitely coming into the season fit and we’re looking forward to taking it to LA and Portland in the first two home games.”