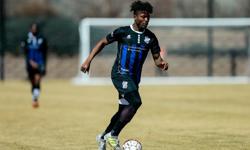 Switchbacks Winger, Shane Malcolm, has been called up to the Guam National team to participate in a friendlies against the LA Galaxy II and San Diego State University this week during the FIFA International Fixture Window taking place between March 19th and the 27th.

Malcolm, who qualifies to play through his paternal grandmother, has had 20 caps for the Guam National Team since 2014, scoring twice, both times during the EAFF E-1 Football Championship, an international competition in East Asia for member nations of the East Asian Football Federation (EAFF). His first goal came in a 2-1 victory over Chinese Taipei during the 2014 competition,  and his other came in 2016 during a 3-2 loss to Hong Kong.

With the call-up, Malcolm becomes the first Switchbacks player in club history to be called-up to play for his national team as an active member of the Switchbacks. Malcolm had a strong first season with the Switchbacks in 2017, recording 1,947 minutes, scoring five goals and adding three assists. Malcolm also received a USL Team of the Week nod in week 21 after his goal against Orange County was nominated for Goal of the Week.

"It's a great honor for him," said Head Coach Steve Trittschuh. "I talked to the coach a few weeks ago when he was going to call him up, and anytime you get the opportunity to get called up to your National Team it's an honor. They're trying to get to the next level with this new head coach and Shane is a big part of that."

The Guam National team will play San Diego State Universiy on Friday, March 23 followed by a friendly against LA Galaxy II on Tuesday, March 27th. The Guam Nation Team's next scheduled competitive matches are for the EAFF E-1 Football Championship Round 1 for qualification into the tournament's Semifinal Round with tentative dates of Sept. 3 - 11 and Nov. 12 - 20, respectively. The venues are not yet determined.

The Switchbacks return home this Saturday to face Portland Timbers 2. The first 500 fans in attendance will receive a Switchbacks winter beanie courtesy of Weidner Apartment Homes. Fans can also get $1 beers the first 30 minutes after gates open at 5:00 PM. Tickets start at just $12 and are available here.