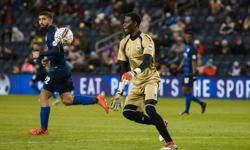 After back-to-back 0-1 losses, the Switchbacks were looking to get back into winning form as they traveled to Kansas City to face Swope Park Rangers. Getting his first start of the season, Moise Pouaty saw action in the first minute where he came up with a beautiful save as he parried it out. Unfortunately, it only took six more minutes for Swope Park to get on the board as Tyler Blackwood blasted it into the far post. Swope Park continued to have the upper hand in the early going, but momentum started to change as the game progressed. The Switchbacks had a number of late opportunities from Josh Suggs, Shane Malcolm, Aj Ajeakwa, and Saeed Robinson, but ultimately came up short. Despite not scoring the Switchbacks would hope to take the momentum going into the second half.

The second half got off to a flying start with both sides having early opportunities but big saves by both keepers held the offenses at bay. Moise Pouaty would come up big a number of times in the second half to keep the Switchbacks in it with six saves on the night. The Switchbacks would push forward late but ultimately would come up empty with their third straight scoreless night.

"It’s the second game in a row we’ve given up an early goal," said Head Coach Steve Trittschuh. "Just a little bit of miscommunication and not tracking a runner. Other than that, we sat in and stayed compact. For the most part, they gave us the ball a lot. They had some possession but it was away from our goal. The only thing that is concerning me is we’re creating enough chances to score goals and we didn’t. That’s the third game in a row without a goal. It’s concerning but it’s not because we are creating those chances. Sooner or later, hopefuly we can score those goals. Defensively, we’re playing pretty well. The guys gave a great effort. We’ve got to go home on Saturday and win our home game. The Rangers are a good team, especially bringing some of the guys down. It’s hard to play since we only travel with 16 and our depth is not that good right now. We’ve got to keep the positives and look forward to the game on Saturday."

"We’re disappointed but we created chances," said Josh Suggs. "We’ve just got to finish them. We’re ready to move on to the next game."

The Switchbacks return home Saturday, April 7th to face Rio Grande Valley FC Toros for 2000's Night and the first poster series night of 2018, courtesy of Kneaders. Tickets start at just $12 and are available here. Fans can also get $1 Beer for the first 30 minutes after the gates open at 5:00 PM.