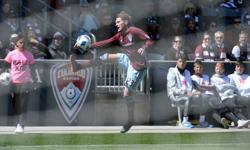 The Colorado Springs Switchbacks FC officially announced they have signed Kip Colvey on loan from the Colorado Rapids of Major League Soccer (MLS).

Colvey joins the Switchbacks after appearing in three games for the Rapids, totaling 208 minutes in Major League Soccer this year. Colvey was selected with the third overall pick in the 2017 Major League Soccer Waiver Draft by the Rapids and is a versatile defender that is capable of playing at left or right fullback. He was a four-year starter at California Polytechnic State University in San Luis Obispo, California where he appeared in 74 games, recording four goals and nine assists. Even though he was born in Hawaii, Colvey has represented New Zealand at the youth level with the U-17 and U-23 teams. He helped his country reach the Round of 16 at the 2011 FIFA U-17 World Cup. Colvey has registered 15 caps with the New Zealand senior team and he was a part of the team that played against Peru in the playoff to see who would go to the 2018 FIFA World Cup.

"He knows this league - he was with Reno last year. He's eager to play and hopefully, he can come in and do a job for us," said Switchbacks Head Coach, Steve Trittschuh. "We just need to get him here so he can get on the same page with how we want to play."

Colvey will be available for Saturday's match against Sacramento. Per the Right of Recall incorporated in the loan agreement, the Rapids retain the right to recall Colvey at any point during the remainder of the MLS regular season, subject to MLS roster compliance guidelines.

The Switchbacks return home on July 14th to face the Sacramento Republic FC where the first 500 fans in attendance will receive a premium bottle and bag courtesy of Heat Depot Home Solutions. Tickets start at just $12 and are available here. Fans 21+ can get $1 beer the first 30 minutes when gates open at 5:00 PM.